This New York Times best-selling author holds a Romance Writers of America Lifetime Achievement Award. With more than eight million copies of her books in print, Elizabeth Lowell has won a huge following of readers who yearn for romance as much as she does. Left alone on her family's Civil War-ravaged farm, Willow Moran wants to find her gold-mining brother in the Colorado Rockies and start a new life. Dark, strong, unsmiling Caleb Black is going to be her guide. As threatening as he seems, this former army scout is Willow's best hope for a safe passage through the treacherous mountains past comancheros and Indian renegades. But torn between his need for a woman and his thirst for vengeance, Caleb has his own reasons for helping the innocent young Willow. Characteristic of Elizabeth Lowell's books, Only His offers an exciting world of heightened passion and warm sensuality. Richard Ferrone's tantalizing narration lets listeners experience the thrill of a dangerous liaison from the safety of an armchair. 1. Language: English. Narrator: Richard Ferrone. Audio sample: http://samples.audible.de/bk/reco/002661/bk_reco_002661_sample.mp3. Digital audiobook in aax. Gina Perini manages a bookstore in one of San Francisco's most lively neighborhoods. Although she thrives in her world of books, her harrowing escape from the war in the Balkans years earlier remains fresh in her mind. There are still those who are searching for her and who are intent on vengeance. Gina suddenly gets news that someone from her past is still alive - someone she had given up hope of finding. This sets in motion a chain of events that will stretch across the country and push her love and resourcefulness to the limit. Through the Bookstore Window grapples with the grim effects of war and violence while exploring how love can transcend age, gender, background, and - perhaps - the listeners' expectations. 1. Language: English. Narrator: Suzanne Elise Freeman. Audio sample: http://samples.audible.de/bk/high/002013/bk_high_002013_sample.mp3. Digital audiobook in aax. Lands Ravaged. Dreams destroyed. Demons set loose upon the earth. War strikes at the heart of women's magic in Moisehén. Eolyn's fledgling community of magas is destroyed; its members killed, captured or scattered. Devastated yet undaunted, Eolyn seeks to escape the occupied province and deliver to King Akmael a weapon that might secure their victory. But even a High Maga cannot survive this enemy alone. Aided by the enigmatic Mage Corey, Eolyn battles the darkest forces of the Underworld, only to discover she is a mere path to the magic that most ignites their hunger. What can stop this tide of terror and vengeance? The answer lies in Eolyn's forgotten love, and in its power to engender seeds of renewed hope.High Maga is the companion novel to Eolyn, also available from Hadley Rille Books. 1. Language: English. Narrator: Darla Middlebrook. Audio sample: http://samples.audible.de/bk/acx0/027037/bk_acx0_027037_sample.mp3. Digital audiobook in aax. 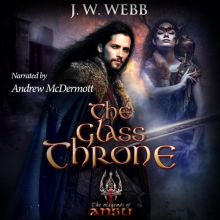 The desert war is over, but the battle for survival only just began...Corin and his friends enter the realms of winter, riding north to join the war against Caswallon. But the traps laid for their arrival will test their loyalty to extremes.Corin must face a dangerous path through the mountains in his quest to reunite with his love and find his true father, fulfilling the witch's prophecy at the ford.Meanwhile, Queen Ariane fights for survival in increasing desperation, by launching guerilla tactics against her enemy. The Glass Throne marks the dramatic conclusion to the story of Corin an Fol, following after The Lost Prince and The Shattered Crown. Like all the books in the Legends of Ansu series, The Glass Throne mingles mystery, myth, and legend with gritty action and snappy dialogue, woven to a vast tapestry of dark fantasy. The books resonate with action, passion, and robust characters that will appeal to fans of Game of Thrones series. If you like tough action featuring gritty characters set to a vivid fantasy backdrop of war, betrayal, and vengeance, then you are going to love this epic tale by J.W. Webb.Get the book to discover this exciting series today. 1. Language: English. Narrator: Andrew McDermott. Audio sample: http://samples.audible.de/bk/acx0/178465/bk_acx0_178465_sample.mp3. Digital audiobook in aax. What if the person who hated you most was the only one who could save you?Thousands of gentlemen have gone bankrupt in Bridges and trouble brews between the Diamond and Spadros crime families. Yet the city is united in its desire to exact vengeance for those murdered in the zeppelin disaster.Penniless and alone, private eye Jacqueline Spadros confronts the lowest point of her life. Seen as an accomplice in the financial crisis and accused of a crime she didn't commit, Jacqui faces trial in front of a hostile jury - and could receive the death penalty.Jacqui knows she's been framed by the illusive Red Dog Gang. But will the jury believe her?The King of Hearts is part 4 of a 13-part serial novellThe Jacq of Spades The Queen of DiamondsThe Ace of ClubsThe King of Hearts From the author:Each book builds on the information presented in the book before it. Because of this, I strongly urge you to listen to the first three books in this series before reading The King of Hearts. If you'd like a quick way to catch up on the series, the Red Dog Conspiracy: Act 1 box set contains the first three books in ebook or audio format.All caught up with Jacqui and ready to go?Get this audiobook today, and continue the journey! 1. Language: English. Narrator: Machelle Williams. Audio sample: http://samples.audible.de/bk/acx0/151426/bk_acx0_151426_sample.mp3. Digital audiobook in aax. Find the missing prince and save the land. Easier said than done, with a sorcerer breathing down your neck. The chase is on and the odds stacking against the downtrodden mercenary and his feisty queen.Queen Ariane and Corin an Fol unite with an enigmatic warlock, a hard-drinking sailor, and his gang of desperados. This mismatched team must find the renegade prince Tarin who has disappeared with the broken remnants of the high king's crown. They need to get those shards back and then make them whole again. That or all Four Kingdoms will tumble beneath the sorcerous might of the usurper Caswallon. A race follows over land and sea with enemies and spies at every corner. Where will it end, and will anyone be left to hold the broken pieces?The Lost Prince follows close behind The Shattered Crown and continues the Crystal King Trilogy. Like all the books in the Legends of Ansu series, The Lost Prince mingles mystery, myth, and legend with gritty action and snappy dialogue, woven to an epic tapestry of dark fantasy. The books resonate with action, passion, and robust characters that will appeal to fans of Game of Thrones. If you like tough action featuring gritty characters set to a vivid fantasy backdrop of war, treachery, and vengeance, then you are going to love this epic tale by J.W. Webb.Pick up The Lost Prince to discover this exciting series today. 1. Language: English. Narrator: Andrew McDermott. Audio sample: http://samples.audible.de/bk/acx0/173240/bk_acx0_173240_sample.mp3. Digital audiobook in aax. 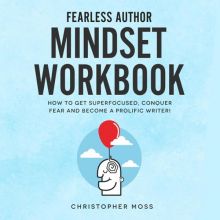 Fearless Author Mindset Workbook is a simple and easy to-action book. If you are struggling to write your book and impact the world or you have written a book but are finding it hard to complete, then this is your chance to transform your writing experience from one of struggle and frustration to joy and action! Imagine that. Having a sense of joy and the ability to write your book without the frustration and resistance? There is a reason according to a New York Times study that 81% of Americans want to write a book but only 1% do. It is one of the hardest challenges you will ever face. But ultimately the most rewarding. If you follow my workbook it need not be! Being an author has changed. You need to write more books and more quickly. I can show you how to be prolific without costing you time with your family or losing the sense of total joy you have when writing. It should never feel like a struggle. My name is Christopher Moss. I have written seven books. I have published five in six months. I have had best sellers; I have sold my books all over the world. I am planning on writing 10 this year. My mission is to help 500,000 people find their purpose and have a better more fulfilling life. Is one of those people you? My first two books felt like shovelling treacle up a hill. I know what it is like to go through all the pain and frustration of writing a book. I thought I had cracked my anxiety, but it was back with a vengeance everything that could go wrong did. It took my two years to publish two books. But I learnt of a system that has worked and will inspire you to be the writer you always wanted. Going from struggling, full of anxiety and anguish to total joy! I have gone through every conceivable struggle and learnt how to overcome it so you don’t have to. Fearless Author Mindset Workbook is not just a workbook, it's a course rolled into one. It has one mission to 1. Language: English. Narrator: Madison Niederhauser. Audio sample: http://samples.audible.de/bk/acx0/164017/bk_acx0_164017_sample.mp3. Digital audiobook in aax. When Rosina's dear friend leapt to her death after the man she loved betrayed her, she vowed vengeance on all men. Rosina declared that no man could be trusted, including Sir John Crosby, Member of Parliament, whom she had secretly loved since girlhood. Now a debutante, she found herself caught up in a whirl of social activity. An election was imminent and her father, Sir Elroy Clarendon, was favoured to be made a government Minister. Her new friend Lady Doreen, daughter of the Earl of Blakemore was secretly in love with an unknown admirer. To Rosina's dismay he turned out to be Arthur Woodward, the man whose betrayal had destroyed her friend, and whose incriminating letters Rosina possessed. In spite of his threats, she defied him. Sir John, after begging her to stop, tried to protect her. How they dealt with the venomous Woodward, and discovered true love, is told in this romantic novel, the 670th by Barbara Cartland. If you like "Downton Abbey" you will love Barbara Cartland. Barbara Cartland was the world's most prolific novelist who wrote an amazing 723 books in her lifetime, of which no less than 644 were romantic novels with worldwide sales of over 1 billion copies and her books were translated into 36 different languages. As well as romantic novels, she wrote historical biographies, 6 autobiographies, theatrical plays and books of advice on life, love, vitamins and cookery. She wrote her first book at the age of 21 and it was called "Jigsaw". It became an immediate bestseller and sold 100,000 copies in hardback in England and all over Europe in translation. Between the ages of 77 and 97 she increased her output and wrote an incredible 400 romances as the demand for her romances was so strong all over the world. She wrote her last book at the age of 97 and it was entitled perhaps prophetically The Way to Heaven. Her books have always been immensely popular in the United States where in 1976 her current book 1. Language: English. Narrator: Anthony Wren. Audio sample: http://samples.audible.de/bk/lind/001610/bk_lind_001610_sample.mp3. Digital audiobook in aax.