The Critically Acclaimed Zero Hour Series, Now in One Complete Edition! Zero Hour is an epic survival/thriller post-apocalyptic series from best-selling post-apocalyptic authors Mike Kraus and Justin Bell, featuring the complete six-book series!A devastating attack. A family separated. A desperate struggle to survive.Jackson Block is trapped far from his family and those he loves when a rogue state unleashes a devastating attack on the United States. To reunite with his loved ones he must fight through streets that have turned into a war zone as survivors and government agents alike threaten not only his existence, but that of the entire nation. Zero Hour is a near-future, what-if tale of the apocalypse told through a frighteningly realistic lens. Zero Hour is a six-part novel-length post-apocalyptic survival thriller series that asks one simple question: Do you have what it takes to survive? The story follows the unleashing of a bio-weapon on an unsuspecting American populace, killing hundreds of millions in the blink of an eye. This post-apocalyptic thriller is written as a collaboration between Justin Bell and number one best-selling post-apocalyptic author Mike Kraus. Zero Hour is a gripping post-apoc thrill ride that takes a unique look at the post-apocalyptic genre and will leave you breathless with every chapter. This complete edition features all six books from the Zero Hour series: Zero Hour Scorched Earth No Shelter Beware the Scarred Total Collapse Final Plague 1. Language: English. Narrator: Carl Norton. Audio sample: http://samples.audible.de/bk/acx0/193278/bk_acx0_193278_sample.mp3. Digital audiobook in aax. The best-selling post-apocalyptic suspense series Outage - the complete series of five books plus bonus epilogue Outage: Control, available for the first time!Something is coming for them.When an early snow ravages the small town of Plainfield, the residents are stripped of heat, power, and mobility. They'll soon wish they had protection. Somewhere outside, something else is lurking. Waiting for the chance to strike....The complete post-apocalyptic horror suspense series Outage, in one complete collection. 1. Language: English. Narrator: Troy Duran. Audio sample: http://samples.audible.de/bk/acx0/217206/bk_acx0_217206_sample.mp3. Digital audiobook in aax. Would you have the mindset to survive? To provide for and defend the ones you love at all costs? Willing to confront the depravity of man? This is a true story, it just hasn't happened yet. Book one of this new post-apocalyptic survival fiction series, 36 Hours, provided the listener a glimpse into the rapid decline of society once word of the catastrophic solar flare racing towards Earth began to spread. Book two, Zero Hour, continues to follow the obstacles faced by Colton Ryman, his wife, Madison, and their teenage daughter, Alex. In 36 Hours, the Ryman family and the rest of the world was thrust into the darkness of a post-apocalyptic world. A catastrophic solar flare brought with it a blast of solar matter in the form of an EMP, leaving America in darkness. The Rymans weren't preppers and had no concept of what prepping entails. They applied common sense, logic, and a will to survive to their decision-making as they prepared for the post-apocalyptic world created by the EMP. The dangers they face are not from the solar flare itself, but from their fellow man. Who can they count on? Who is a threat? The words of Colton Ryman's grandfather repeated in his mind. Never underestimate the depravity of man! Note: This book does not contain strong language. It is intended to entertain and inform audiences of all ages, including teen and young adults. Although some scenes depict the realistic threat our nation faces from a devastating solar flare, and the societal collapse which will result in the aftermath, it does not contain graphic scenes typical of other books in the post-apocalyptic genre. 1. Language: English. Narrator: Kevin Pierce. Audio sample: http://samples.audible.de/bk/acx0/067858/bk_acx0_067858_sample.mp3. Digital audiobook in aax. The Apex Trilogy box set includes three books: Dead Mech, The Americans, and Metal and Ash. The three books feature a post-apocalyptic zombie-ridden landscape with military and mechanical action and loads of adventure. Dead Mech: In a post-apocalyptic far future, there is only one thing that can save the fragile civilizations humanity has cobbled together: the mechs. A ragtag crew of mech pilots must battle the undead hordes, cannibal tribes, and religious cults in a daily race to keep humanity safe. But now, a threat worse than anything has surfaced and is growing stronger. The undead have reanimated in their own battle machines and created the rise of the dead mechs! Dead Mech is a zombie-filled, post-apocalyptic, military sci-fi and mechanical action and adventure novel like no other!The Americans: The exciting sequel to Dead Mech is a hell-ride through Europe, Asia, and beyond as American ghost Heather Walton must save her family, her friends, and an all important cargo. The world has survived the North American zombie apocalypse, but Americans struggle to maintain their place in a world where the powers that be no longer want them. And will stop at nothing to put an end to their standing and their very existence!Metal and Ash: Will 50-foot battle mechs be enough against hundreds of thousands of techno-zombies ready to wipe everything living off the scorched map that is the wasteland?Alliances are formed and broken, mech pilots are made and murdered, secrets are revealed, agendas destroyed, and thousands of bodies fall and rise again.What began in the wasteland of Dead Mech continued alongside in Europe and Asia in The Americans and then, has its epic conclusion in Metal and Ash! 1. Language: English. Narrator: Julie Hoverson. Audio sample: http://samples.audible.de/bk/acx0/174464/bk_acx0_174464_sample.mp3. Digital audiobook in aax. 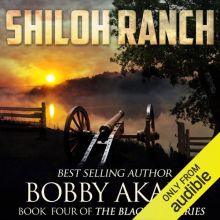 The strongest emotion of man is fear, and...fear of the unknown is the greatest fear of all. Could you face fear head-on? Can you forget all those moments when you thought you wouldn't survive, but did? This fast-paced post-apocalyptic dystopian fiction series from author Bobby Akart (The Boston Brahmin series and the Prepping for Tomorrow series) has been hailed as a masterpiece of EMP survival fiction. Prepare to learn, as well as be entertained, as the Blackout series continues with Shiloh Ranch. After a perilous journey replete with highs and lows around every turn, the Rymans reach their destination only to face guns pointing at them from all directions. Did they make a mistake? Should they have stayed home where familiar surroundings may have outweighed the threats closing in on them? They quickly learn that there is one constant in a post-apocalyptic world - the threat from their fellow man. This is the fourth book in the best-selling Blackout series. This book does not contain strong language. It is intended to entertain and inform audiences of all ages, including teen and young adults. Although some scenes depict the realistic threat our nation faces from a devastating solar flare, and the societal collapse which will result in the aftermath, it does not contain graphic scenes typical of other books in the post-apocalyptic genre. 1. Language: English. Narrator: John David Farrell. Audio sample: http://samples.audible.de/bk/acx0/080181/bk_acx0_080181_sample.mp3. Digital audiobook in aax. The complete three book series of Surrender the Sun in one convenient boxed set of apocalyptic, dystopian chaos: Tons of action and suspense. Three books for the price of one!Bishop's HonorSanctuaryPoint of No ReturnBy best-selling author, AR Shaw!Surrender the Sun: When the snow hits the fan.Because it happened once before and it will happen again. In the year 2030 the Maunder Minimum, a period of solar inactivity, will cause a mini-ice age like it did between the years 1645 and 1710. When it does, Bishop will have to save her not only from the effects of severe weather but also from man himself.If you love dystopian post-apocalyptic books by such authors as A. American, Steven Konkoly, or Tom Abrahams you'll enjoy Surrender the Sun. Fans of One Second After, Lucifer's Hammer, Into the Forest, and The Stand did too. 1. Language: English. Narrator: Kevin Pierce. Audio sample: http://samples.audible.de/bk/acx0/131204/bk_acx0_131204_sample.mp3. Digital audiobook in aax. The infection has begun, ravaging the American Southwest and leaving chaos in its wake. In this new world, there will be no last meal, no dying wish. The only reward left is to survive another day... This bundle contains the first four books in the Contamination post-apocalyptic zombie series: Contamination Zero Contamination 1: The Onset Contamination 2: Crossroads Contamination 3: Wasteland 1. Language: English. Narrator: Troy Duran. Audio sample: http://samples.audible.de/bk/acx0/018726/bk_acx0_018726_sample.mp3. Digital audiobook in aax. Books 1-3 of the thrilling post-apocalyptic survival series, Atomic Threat, now available in one set!The nation is thrown into darkness. Nuclear attacks kill millions. No one is coming to save you.When the warning of an imminent attack on America appears online, Jack assumes it's a hoax. But after the electrical grid is wiped out and a nuclear bomb levels downtown LA, his world crashes down. He's got only minutes to save himself. And the worst part? He's a thousand miles from Annie, his wife.Annie is in Austin when a plane falls from the sky. Soon, the capital is torn apart by a coordinated terror attack and panicking citizens. Stranded in a city thrown into chaos, Annie's only escape is blocked by armed guards. Should she risk her life trying to flee, or face the nightmare rising up around her?With time running out on the West Coast, Jack must search for safety before it's too late. How can he escape the violence breaking out in LA and make it home to Texas? And will Annie still be alive if he does?Atomic Threat: Books 1-3 is a post-apocalyptic thriller series about ordinary people fighting to survive the end of the world as we know it. 1. Language: English. Narrator: Andrew Tell. Audio sample: http://samples.audible.de/bk/acx0/198228/bk_acx0_198228_sample.mp3. Digital audiobook in aax. Build. Destroy. Rebuild. The dawn of human existence has proven we are warlike creatures. Civilizations are built, then they're destroyed. After destruction, will you have the tenacity to overcome obstacles and rebuild? Your fellow man may be the biggest hurdle because hell is empty and the devils are all here. This fast-paced post-apocalyptic dystopian fiction series from author Bobby Akart (The Boston Brahmin series and the Prepping for Tomorrow series), has been hailed as a masterpiece of EMP survival fiction. Prepare to learn, as well as be entertained, as The Blackout Series continues with Devil's Homecoming. In the final installment of The Blackout Series, Devil's Homecoming, an unexpected turn of events deals the rebuilding effort a near deadly blow as the United States Government, in the form of a FEMA occupying force, descends upon Savannah. The FEMA battalion's leader is hell-bent on revenge and he is proof that in a post-apocalyptic world, hell is empty and all the devils are here. Note: This audiobook does not contain strong language. It is intended to entertain and inform audiences of all ages, including teen and young adults. Although some scenes depict the realistic threat our nation faces from a devastating solar flare, and the societal collapse which will result in the aftermath, it does not contain graphic scenes typical of other audiobooks in the post-apocalyptic genre. Books in The Blackout Series: Book One: 36 Hours Book Two: Zero Hour Book Three: Turning Point Book Four: Shiloh Ranch Book Five: Hornet's Nest Book Six: Devil's Homecoming 1. Language: English. Narrator: John David Farrell. Audio sample: http://samples.audible.de/bk/acx0/087896/bk_acx0_087896_sample.mp3. Digital audiobook in aax.