Akano, the Futanari, has promised Matt and Amanda she can get them into a posh VIP lounge at an upscale restaurant. This requires getting past a very pretty but snooty maitre d'. But as seen in the previous two books in this series the Futanari is very persuasive. There is also ice skating, romance, humor, and sex. 1. Language: English. Narrator: Jessica Howard. Audio sample: http://samples.audible.de/bk/acx0/151140/bk_acx0_151140_sample.mp3. Digital audiobook in aax. This books covers all things bass fishing for beginners. Bass fishing is actually more than just a hobby nowadays. Bass (specifically the black bass) is the most popular type of game fish in the US today. Of course, there are a number of different bass species that people generally just call "bass" or even "black bass". Examples of which include Guadalupe bass, Kentucky bass, spotted bass, small mouth bass, and largemouth bass. I’ll provide comprehensive bass fish information in the guide. Bass is fished as a form of recreation simply because they fight back. They’re pretty strong and you get to feel that first hand when you have them on your line. Some people get into bass fishing for recreation, while others are in it for the sport. You can even call it a hobby, considering that you really have to purchase proper equipment. This species is pretty difficult to catch if you are ill equipped and if you do not have the right skills. Listen to this book for more bass fishing for beginners tips that you won’t find in other bass fishing books. 1. Language: English. Narrator: Gene Tognacci. Audio sample: http://samples.audible.de/bk/acx0/100047/bk_acx0_100047_sample.mp3. Digital audiobook in aax. From Sun to Sun: A Hospice Nurse Reflects on the Art of Dying , Hörbuch, Digital, 1, 443min

I got tired. Tired of all the fluffy, just-guessing books about what people regret, want, and will do at the end of their life. I'm a hospice nurse and I want to show the world how love can be messy, not-pretty, complicated, funny, fun and heart-breakingly beautiful. I want the world to know that caring for someone who's dying is challenging and this is where you discover your true self. 1. Language: English. Narrator: Karen Gundersen. Audio sample: http://samples.audible.de/bk/acx0/094356/bk_acx0_094356_sample.mp3. Digital audiobook in aax. A Matter of Character: The Sisters of Bethlehem Springs , Hörbuch, Digital, 1, 462min

In A Matter of Character, by award-winning author Robin Lee Hatcher, the year is 1918 and writing gritty dime novels simply isn't done by a woman. So Daphne McKinley - smart, pretty, talented - publishes her rough-and-tumble books under a male pseudonym. But when a newspaperman enlists her aid in restoring his grandfather's good name, Daphne finds herself re-examining the power of her words and reconsidering the direction of her life. 1. Language: English. Narrator: Kathy Garver. Audio sample: http://samples.audible.de/bk/zond/000753/bk_zond_000753_sample.mp3. Digital audiobook in aax. David Sedaris's remarkable ability to uncover the hilarious absurdity teeming just below the surface of everyday life is surpassed only by his ability to make his stories even more hilarious when he reads them aloud. This is the complete recording of Meet David Sedaris Series Two, his second series for Radio 4, and he reads essays from several of his books as well as many brand new diary pieces and extras. The full listing is: The Incomplete Quad, taken from Naked The Squirrel and The Chipmunk and The Motherless Bear, taken from Squirrel Meets Chipmunk Me Talk Pretty One Day and Make That a Double, taken from Me Talk Pretty One Day It’s Catching and Momento Mori, taken from When You Are Engulfed in Flames Nuit of the Living Dead, The End of the Affair, Us and Them and The Ship Shape, taken from Dress Your Family in Corduroy and Denim 1. Language: English. Narrator: David Sedaris. Audio sample: http://samples.audible.de/bk/twuk/000653/bk_twuk_000653_sample.mp3. Digital audiobook in aax. 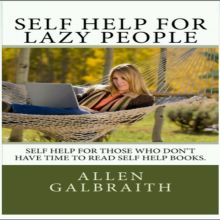 Self Help for Lazy People: Self Help Ideas Summarized for People Who Don't Have the Time to Read Self Help Books , Hörbuch, Digital, 1, 170min

If you listen to this short audiobook, you will never have to listen to another self-help book again. Ever! That is quite a claim, but I have spent the best part of my adult life reading self-help books, and they all pretty much say the same thing. So I decided to distill all I have learned from these books into this compact form. I really wish I had a book like this 20 years ago! It would have saved me a lot of time and a lot of money! Learn how to: Be a better person in all aspects of your life Cope with change better Look after your health Deal with difficult people Change the way you think Deal with stress Kick bad habits and much, much more! The returns on the extremely small investment of purchasing this book will pay you a hundred fold for the rest of your life. This short book will change your life and your reading and listening habits forever! No more self-help books needed! 1. Language: English. Narrator: Neal Arango. Audio sample: http://samples.audible.de/bk/acx0/044953/bk_acx0_044953_sample.mp3. Digital audiobook in aax. Jo glanced at the Doctor. ‘Things must be pretty serious then’.‘They are, Jo. Very serious indeed. The whole of the Universe is in danger.’ The most amazing Who adventure yet, in which Doctors One, Two and Three cross Time and Space and come together to fight a ruthlessly dangerous enemy - Omega. Once a Time Lord, now exiled to a black hole in space, Omega is seeking a bitter and deadly revenge against the whole universe... Katy Manning reads Terrance Dicks’ complete and unabridged novelisation, first published by Target Books in 1975. 1. Language: English. Narrator: Katy Manning. Audio sample: http://samples.audible.de/bk/bbcw/003396/bk_bbcw_003396_sample.mp3. Digital audiobook in aax.